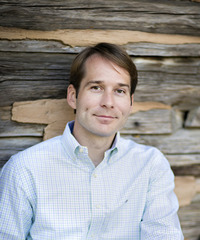 His debut novel, The Atlantis Gene, is the first book in The Origin Mystery, the trilogy that has sold a million copies in the US, is being translated into 19 languages, and is in development at CBS Films to be a major motion picture. The trilogy will be in bookstores (in hardcover and paperback) around the world in 2015.

His recently released fourth novel, Departure, follows the survivors of a flight that takes off in 2014 and crash-lands in a changed world. The hardcover will be published by HarperCollins in the fall of 2015, and 20th Century Fox is developing the novel for a feature film.

Riddle grew up in a small town in the US (Boiling Springs, North Carolina) and graduated from UNC-Chapel Hill. During his sophomore year of college, he started his first company with a childhood friend. He currently lives in Florida with his wife, who endures his various idiosyncrasies in return for being the first to read his new novels.

No matter where he is, or what’s going on, he tries his best to set aside time every day to answer emails and messages from readers. You can reach him at: ag@agriddle.com

** For a sneak peek at new novels, free stories, and more, join the email list at:
www.agriddle.com/email

If you don’t want to miss any Riddle news, you can: